By definition, a fume hood is a ventilated enclosure that is designed to limit exposure to hazardous or toxic fumes, vapors, or dusts. 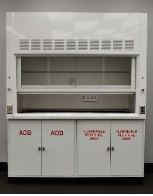 As the most important appliance in a laboratory, fume hoods keep employees safe by removing harmful vapors and chemicals from the work area. The air they extract is then filtered by the building’s exhaust system before exiting the facility. That, right there, is the simple, two-sentence version of how a ducted fume hood works. But let’s dig a little deeper into how these devices function.

What is the purpose of a fume hood?

As stated, the primary purpose of the fume hood is to contain gases, vapors, and fumes and exhaust them out of the area. When used properly, fume hoods are one of the most reliable engineering controls in a laboratory. They protect users by:

How does the fume hood work?

1. Pulls in contaminated air from the laboratory

The fume hood begins this process by pulling air from the room through the sash.

The air being pulled through the fume hood is measured in one of two ways:

2. Pushes vapors toward the exhaust area

As the air flow works its way through the middle of the fume hood, the hood pushes the harmful gases 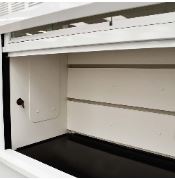 An exhaust fan situated on the top of the building pulls the air through connected ductwork and releases it into the atmosphere. Or, in ductless fume hoods, the air is filtered and recirculated back into the room.

There are certain fume hoods for special uses and some even cater to specific chemicals. It is always best to consult the manufacturer’s recommendations for proper use and safety standards to ensure that your hood is efficient and effective.

National Laboratory Sales is the exclusive distributor of Fisher American fume hoods and also has a large selection of hoods from Labconco, Fisher Hamilton, Kewaunee, Hamilton Scientific, and many others. Search our impressive inventory to find a fume hood that works for you.