The speed at which air is drawn into a fume hood is of great importance for the safe and effective operation of a fume hood. A speed that is too high or too low can compromise the performance of the fume hood, leaving those near the hood in danger. So why does this airspeed matter? What is so significant about the face velocity measurement of a fume hood? 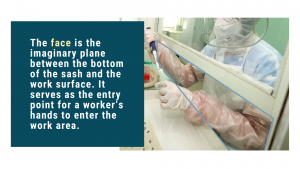 What is a Fume Hood Face?

If we are going to talk about face velocity, we better know the components of a fume hood. The face is the imaginary plane between the bottom of the sash and the work surface. This is the opening in which air is pulled from the lab into the hood. It serves as the entry point for hands to enter the work area. Across this imaginary plane is where face velocity is measured using an appropriate monitor.

What is Fume Hood Face Velocity? 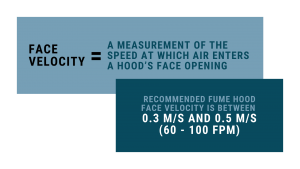 Face Velocity is a measurement of the speed at which air enters a fume hood’s face opening. It is generally recommended that a fume hood’s face velocity is between 0.3 m/s (60 fpm) and 0.5 m/s (100 fpm), however, it is best to check with local safety regulations because variations exist by state and use. 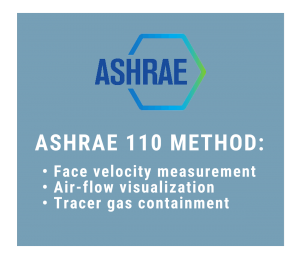 ASHRAE, The American Society of Heating, Refrigerating, and Air-Conditioning Engineers, created the ASHRAE 110-2016 Method of Testing Performance of Laboratory Fume Hoods. This process does not specify ranges for face velocities, but instead provides a thorough protocol for hood performance testing. The three-part test includes:

This process goes beyond strictly measuring the performance of a fume hood by its face velocity rating and also tests the fume hood’s ability to contain and exhaust fumes.

To measure air-flow visualization a smoke stream is created at various points in the fume hood work area. Then visually, one can see and understand the air flow currents that exist inside the fume hood. Although airflow is observed through sight, data is collected digitally for more exact results.

The tracer gas containment test involves the release of gas inside the hood while a gas monitoring device is placed in the estimated breathing zone of a worker positioned near the fume hood. The device measures the presence of the tracer gas outside of the fume hood.

Face Velocity as the Only Test 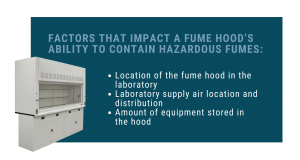 Since face velocity is the only test required by most regulatory organizations, face velocity tests are often the only test performed on fume hoods. Even though other, more costly tests, can provide a better measurement of a fume hood’s effectiveness and its ability to contain hazardous substances.

Additionally, there are factors unique to each setting that impact a hood’s ability to contain hazardous fumes. These factors include:

Even if a fume hood’s face velocity is within safety recommendations by a local regulatory agency, it may not serve as a guarantee of complete containment. As with many situations, ensuring total safety is more complicated than a single test and actually requires the addressing of multiple issues. It is great to keep face velocity in mind when you purchase your next fume hood, but it is also good to keep in mind that measuring face velocity is not the only test you need when determining if your fume hood is providing a safe work environment.