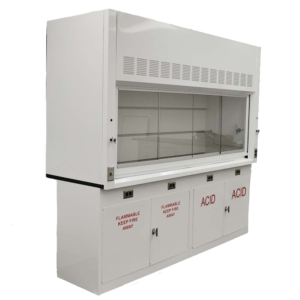 Fume hoods are meant to be used in instances in which there may be toxic or explosive materials present. According to The University of Missouri, a fume hood is one of the most important used and abused hazard control devices.

The combined use of safety glasses, gloves, smocks, good safety practices, and a fume hood will serve as protection from exposure to hazardous materials.

Remember, fume hoods only protect users when they are used correctly and working properly. The main purpose of a fume hood is to protect the user from exposure to toxic fumes and materials. A secondary purpose is to act as a protective shield in the case of an explosion, but this can only be accomplished if the hood is used correctly and the sash is lowered.

How Do You Make Sure That Your Fume Hood Is In Good Condition?

When using a fume hood, you should always check to be sure that it has been inspected within the last 12 months. We have more details on how often to inspect your fume hood. Evaluate the hood before each use to ensure that it is operating at the correct face velocity.

It’s also imperative that you practice safety precautions while working within a fume hood.

– Keep the hood clear of clutter, never use it for storage.

– Complete all work at least six inches from the opening of the hood.

– Lower the sash when the hood is not in use.

– Never place your head inside the hood.

– Avoid quick movements while near the hood- this may cause turbulence resulting in hazardous vapor escape.

To ensure that your fume hood continues to function properly, it must be tested upon installation and at least once a year. To obtain a certification, the fume hood must meet certain requirements.

– As Manufactured (AM): Requires the manufacturer to test the fume hood in their facility and provide the test data with the hood.

– As Installed (AI): The most common mode used for testing fume hoods. It is done after the unit is installed and before it is used to verify that it is operating properly and safely.

– As Used (AU). A dynamic test performed in an actively occupied lab. This test is usually used as a diagnostic test to assess the nature or source of a problem.

The ANSI/ASHRAE 110 test is a method of testing the performance of laboratory fume hoods. The three test procedures incorporated into the ASHRAE 110 test are the Face Velocity Grid Test, Flow Visualization or Smoke Test, and Tracer Gas Containment Test. Tracer gas containment tests are especially important, as studies have shown that face velocity is not a good predictor of fume hood leakage.

In order for the hood to pass, the following conditions must be met:

– The average face velocity with the sash at an opening of 18 inches must be a minimum of 100 fpm.

– The average face velocity with the sash at an opening of six inches cannot be greater than 300 fpm.

– Smoke cannot come out of the hood.

Airflow monitors are the best way to tell if your fume hood is operating in compliance with ASHRAE 110 and other regulations. They directly measure the velocity of the air coming into a fume hood, ensuring that the hood has adequate containment and ventilation. Most fume hoods are equipped with monitors that will sound an alarm when the airflow drops to approximately 80% of the design velocity.

Although you are required to have an airflow monitor on your fume hood, not all hoods come with monitors. This is because there are many different types of monitors that serve different purposes. There are two major types of airflow monitors; analog and digital.

Whether your fume hood operates on a constant air volume (CAV) or variable air volume (VAV) system will determine which type of monitor you can get.

If the hood is installed on a CAV system, you can use either a digital or an analog airflow monitor provided by the hood manufacturer.

If the hood is installed on a VAV system, the airflow monitor must come from the VAV supplier so that it can be properly calibrated. A CAV monitor from a hood manufacturer will not work on a VAV system because when the sash is lowered, the face velocity will increase.

As with all other equipment, it’s important to make sure that you maintain your fume hood. Your safety, and the safety of those around you, is dependent on it functioning properly.