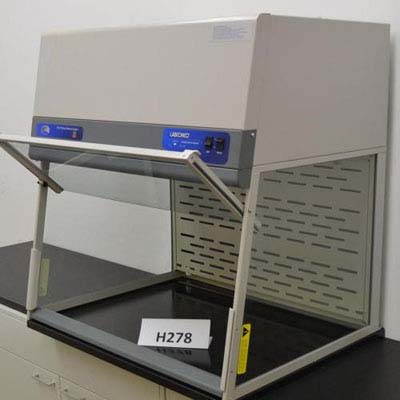 The need for ventilation in laboratories has been necessary since the early days of chemical research. Using a local chimney to vent out harmful gases was the obvious solution to this problem. At the University of Virginia during the 1800’s, Thomas Jefferson did just that. He constructed a hearth with a sand bottom and special flues to vent toxic gases. Years later, Thomas Edison mimicked Jefferson and came up with what is believed to be the first fume hood. Jefferson, concerned about ventilation, used the natural draft of his fireplace chimney to vent his lab.

Fume Hoods Through the Years

In 1923, the University of Leads uses one of the first recognizable fume hoods. Like modern fume hoods, there was a large cupboard at working height with a vertical rising sash. 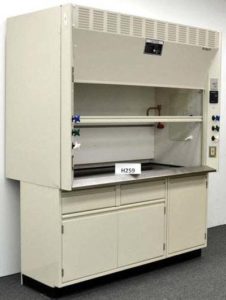 Labconco, a manufacturer of superior laboratory equipment, opened its doors in 1925.  Eleven years later they developed their first fume hood for commercial use. The unit allowed a single operator to work safely with their hands in the cabinet.

In 1943, technology for variable exhaust control was developed by John Weber, Jr. This concept became a standard feature on fume hoods. It ensured that constant face velocity was maintained while working. And also greatly contributed to fume hood performance.

A decade or so later, John Turner of Oak Ridge National Laboratory introduced horizontal sliding sashes. These were to replace vertical rising sashes and reduce total energy consumption. It was also realized that reducing sash open times, even when not in use, would conserve energy.

When the 1960’s came around, Labconco released its first one-piece, molded fiberglass-lined fume hood. Fiberglass was used for its durability, cleanability, and its resistance to fire and chemicals. Prior to this, fume hoods were primarily manufactured from wood.  Epoxy powder-coated steel would soon become the norm. Labconco would continue to release other products throughout the decade. Another fume hood manufacturer, Erlab, sold the first Captair ductless fume hood in 1968.

As research continued to expand and working spaces increased, Labconco developed a walk-in fume hood in the 1970s. Safety standards were evolving and were slowly introduced to evaluate the performance of fume hoods.

Standards were developed in the following years and became referred to as AFNOR AF X 15 211:1995 and were officially introduced in 1996. These standards remain today and provide strict criteria to evaluate the performance of fume hoods.

During the 2000’s additional technological advancements took place. Low-flow fume hoods were released to save on cost and energy. Flores Valles introduced Adiprol, a resin that provides high chemical resistance and protection against fire. This technology was designed specifically for use in schools and universities. And Fisher Scientific introduced an AutoSash. A feature designed to enhance safety by positioning an extra trough in front of the unit to collect any spills.

Technological advancements and energy efficiency continue to steer the fume hood market. High-performing fume hoods with minimal environmental impact will only improve. And these advancements are desirable characteristics for laboratory managers. National Laboratory Sales works with all laboratory personnel and has a large selection of new and used fume hoods. Any size is available and can be paired with laboratory casework to match. Get in touch with National Laboratory Sales today to discuss laboratory furniture that is right for your specific needs. 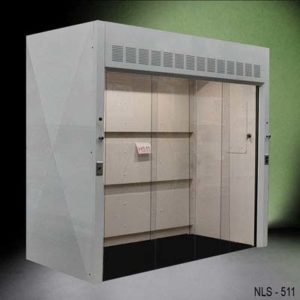