Whether you work in a large research facility or a makeshift laboratory in your garage, it’s imperative that the equipment you use is safe.

Chemical fume hoods are crucial to maintaining a safe work environment. They should be tested and certified to ensure that they’re operating at optimal airflow levels for containing hazardous chemical vapors and gases.

How Often Should Fume Hoods Be Tested?

According to the standards set forward by OSHA, chemical fume hoods should be tested annually.

Additionally, there are three test types, As Manufactured (AM), As Installed (AI), and As Used (AU).

AM is done once the hood is built and is generally done in a testing lab where environmental factors are removed as much as possible.

AI testing is done once the hood is installed in the lab but before anything is placed inside. This can reveal issues related to how the hood was installed, room operation/location, and other room environment factors.

Finally, AU testing is done in the lab with materials inside the hood. This test takes into account both the room environment and users and can determine if there is an issue with how it is being operated by comparing the test results to the AI results.

The AU test should be conducted annually.

The American Society of Heating, Refrigerating and Air-Conditioning Engineers (ASHRAE) is a “diverse organization dedicated to advancing the arts and sciences of heating, ventilation, air conditioning and refrigeration to serve humanity and promote a sustainable world.”

ASHRAE publishes standards for testing regarding the design and maintenance of indoor environments. The standards define minimum values for accepted performance of a variety of ventilation-related products.

ASHRAE 110 is a quantitative test procedure for determining the operating capabilities of a fume hood. The test measures how the hood contains and exhausts fumes.

ASHRAE 110 has been the standard for testing fume hood containment since 1985. In April 2016, ASHRAE 110 was updated to create a more accurate test and a safer work environment.

One key component of the update is that it requires a digital collection of data rather than manual data collection. This reduces the chance of human error in recording this data.

The face velocity test measures the speed of the airflow within a fume hood. An average reading is calculated from measurements taken from multiple points within the fume hood. It also includes the measurement of cross drafts around the hood and calibration of airflow monitors.

The actual measurement is done with a digital electronic anemometer. This device measures the airflow in feet per minute (fpm). For a fume hood to pass, its face velocity must be between 95-130 fpm. Ideally, it should measure 100 fpm.

The smoke visualization test has procedures for both small volumes and large volumes of smoke to clearly see how the air moves and is contained within the hood. In addition to airflow patterns, it shows how contaminants could escape and reach the operator at various sash heights. 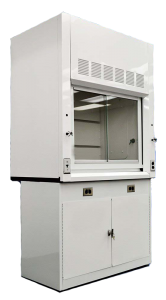 The tracer gas test determines exposure levels based on how many contaminated particles are able to escape the hood and reach the operator’s breathing zone.

To perform the test, tracer gas, usually sulfur hexafluoride (SF6), is injected into the fume hood while a mannequin is placed outside the hood to simulate an operator. The face of the mannequin is fitted with a tracer gas detector which will measure the amount of SF6 in five-minute intervals to determine the average escape amount.

Trace gas testing is the best way to assess if a fume hood has full containment.

Once a hood has been tested and is operating at an acceptable level, you will receive a sticker confirming its certification date and measurements. If your hood does not have a certification sticker or the last date of inspection on the sticker was more than a year ago, you need to get your fume hood tested.

To schedule a fume hood test, contact a local testing service. They will come to service the hood and certify that it is functioning properly.